As engineers, we like to script and automate whatever’s possible. It doesn’t matter if we’re talking about creating three-character-long aliases for a ten-character-long command, adding labels to newly created issues, or ordering a donut delivery to the office at the touch of a button (currently in development ;) - it has a lot of advantages.

Whenever you write a script or automate some process, these things happen:

In today’s world, where more and more products provide an API, the options are often limited only by our imagination. We have IFTTT and Zapier. We have self-hosted tools like Kibitzr or Beehive.

This post focuses on what we automate at HolidayCheck and how we do it.

Each time a branch is created/updated in our repository, the content of this branch is deployed to a staging environment (based on Mesos + Marathon). This means that a couple of minutes after pushing changes, a developer can show them to the product owner. This allows us to iterate quickly.

On the other side, the amount of resources (RAM + CPU) is limited. And people can sometimes forget to undeploy a branch when a feature is merged to production. That’s how deployment-cleaner was born, created by Mathias.

It was a simple application, which basically glued express, github-webhook-handler and healthcheck-ping with two-dozen lines of custom code, making API requests to the staging environment. This app would be notified via webhooks whenever a branch was deleted (which in our case is a natural follow-up to merging a feature-branch). After that happened, deployment-cleaner would make an API request to our staging environment causing undeployment of that specific branch.

Simple. Effective. One problem that we had with the mentioned event approach was that in case of some bug/network issue webhook or request to the API, it might not be delivered, which would mean that without manual intervention, it would stay on staging environment “forever”.

after a branch is merged, undeploy this specific branch

each X minutes, fetch a list of deployed branches from Marathon, compare then with branches on GitHub and undeploy those, which are no longer on GitHub

So, in this case, more of a scheduled than an event-based approach.

At HolidayCheck, the inseparable part of development is the code review process. For a big majority of projects, an approval from a colleague is required for a pull request to be merged into master. Back in the day, when GitHub didn’t have official support for the code reviewing process we were relying – like a lot of different projects – on labels like needs-review, in-rework, ready-to-merge and of course the famous LGTM 👍 comment, which was basically a pull request’s approval.

After a couple of weeks of someone forgetting to change a label during workflow (we’re only human), we started to think how we can automate this part. What we wanted was:

every time someone creates a new pull request, add a needs-review label to this pull request

So, we needed a very simple “application” to do that. Very similar to deployment-cleaner. Same express, github-webhook-handler, healthcheck-ping combo, just different custom logic.

Some time ago we started using greenkeeper. It was a nice tool which helped us with keeping dependencies up-to-date. Whenever a new version of a dependency was released, the pull request with this specific change was created automatically and run through our continuous-integration pipeline. What was left for the developer was clicking the big green Merge button under the PR. For the first time, for the second time, for the seventeenth time, for the nth time.

Remember what I said about being a lazy engineer? Well, we thought we could automate that part, too. And so we did. 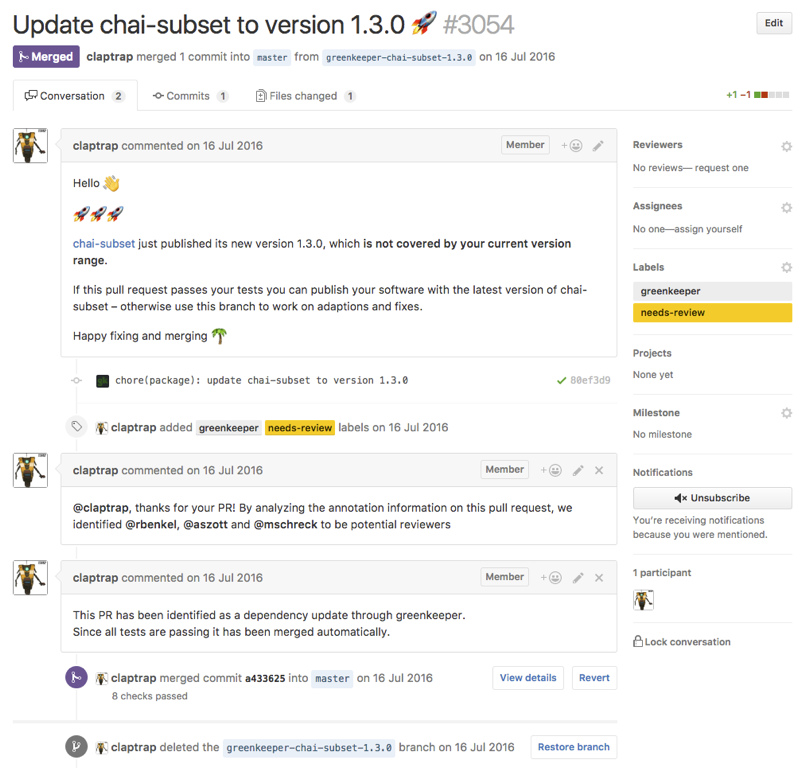 Notes for the screenshot above:

One to rule them all

More and more automation pieces like that started popping up at HC, so we wanted something which would serve as a “runner”. After a brief encounter with botdylan and not being able to find a replacement, we created a simple runner on our own.

And that’s how, during two December days on Gran Canaria (one of our company hackathons), liam was born (after almost a year of using it, we published it as open-source).

Our main ideas while developing liam were:

Flexibility of liam works in two ways. You don’t need liam in order to run liam’s task (although it’s easier with liam, especially for GitHub hooks). On the other side, you can use liam for running any task you want.

There’s no liam.json|yaml|conf file here – that’s intentional. Most of the time we were restricted by possibilities of static config, so we decided to go with pure code approach. Although one can easily create something like liam-configurator which would read the aforementioned config and call addHook and addCron respectively.

We released some general use tasks as part of liam-tasks repository. In addition to these, we’re using a couple of internal ones, meant specifically for our architecture, like:

You can have one liam instance per company, per project, per multiple projects, you can create liam instances per specific tasks – it’s up to you. For us, one liam per project turned out to be the sweet spot, but that doesn’t mean the same will work for you. Probot

Some time ago GitHub released probot – a framework for building GitHub Apps to automate and improve workflow. We’re experimenting with this too. For example, Sergii created issue-prioritizer, which automatically calculates issue priority based on Effort, Potential, and Weight labels:

Depending on your needs, probot might work better for you than liam, or it could be the exact opposite.

Whatever you choose, be responsible

Automation is fun. Automation is for lazy people. Also, it’s not easy. Having once deleted all branches in a project while writing an automation task, I can just repeat what Uncle Ben once said:

Test your automations well. Cover error cases. And when everything works and the robots are doing your job – have a tea or coffee. You’ve earned it, lazy engineer.