I hate beginnings. The feeling of excitement with starting something new is so great that I miss it terribly when it ends. Depending on the attitude it can last long or end quickly the next day you get back to work. But the beginning phase ends and then real work starts.

It took me some time to learn my skills as a software developer. I had some luck at the begining of my career with meeting the right people who had led me further. It took me even more time to beat the famous impostor’s syndrome by just focusing on what eventually mattered the most to me: personal growth. But after couple years of learning, something terrible happened to me. I got stuck.

The beautiful ride on the steepness of the learning curve slowed down. Even changing jobs had led me nowhere. What next, I asked?

In World of Warcraft, if your character is stuck, all you have to do is to use the unstuck option. It magically teleports you into a place where you are not stuck anymore. 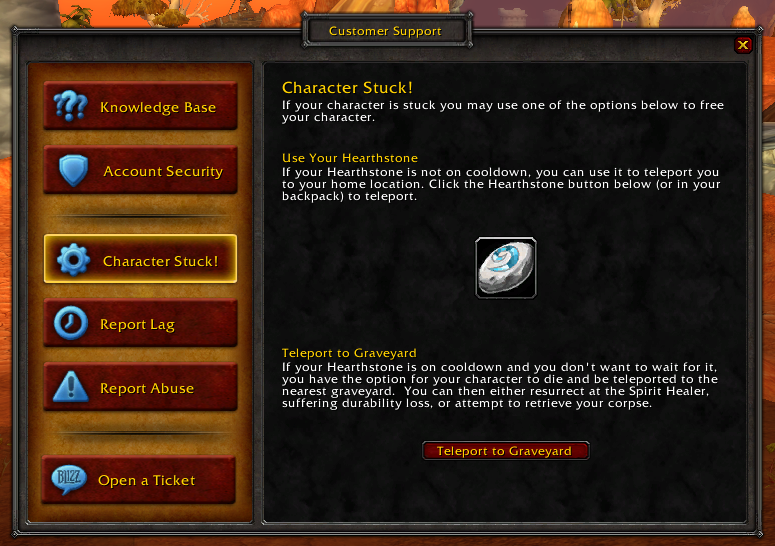 Unfortunately in real life there is no option like that. Worse, it’s 2017 already and teleportation didn’t happen. So I had two options. Either I could continue making fantasy progress playing World of Warcraft, or I could focus on the actual problem – being stuck in real life. I played for two more weeks and then decided to solve the issue. I’d already read a couple of articles talking about career development and one of the pieces of advice was to find a mentor.

“Sounds great, doesn’t work.” as a famous blonde said, but not in all cases. I used to learn from other people, but eventually lost contact with them. I also tried to find new ones by asking, “Hey! Can you teach me?”. Maybe I was too direct, maybe it was something else. I failed anyway. Time passed, still no mentor around.

But who said that mentors have to be alive?

There are few places where you can find dead people. The most effective way to find a dead person who can still teach you something is grabbing a book. If there is any other way, please, send me a message – I have a few favourites to talk with. Psychologist Robert Greene has done a terrific job writing about many great people. I believe that it’s not arrogant to say that I want to be great, too. So I read Greene’s book called Mastery.

It helped me learn something about myself by reading about others. I could compare my life with the lives of great inventors, politicians, and artists. Detailed stories about the hard work they put into their careers provided me with motivation; the problems they had to solve helped me solve mine.

I was ready to learn more. Unstuck, awesome.

So if one book made such a difference, why not read more? Finding a list of books you have to read in your life was a good start. Somehow I understood that, in the long run, firing the motivational shots wouldn’t get me as far as I wanted to be. But what if I could change a little bit the way I think about growth? I’d skimmed through the list and decided to go with the first one: Mindset by Carol Dweck.

I quickly understood that my mindset was ’fixed’. I’d been successful for a few years. On the other hand, though, I’ve had people tell me that I sucked. I strongly wanted to prove them wrong, even going so far as to tell myself that I was better than they were.

I learned that the fixed mindset wasn’t good. My question, therefore, was, “what’s the good one?”. Turns out it’s ‘growth’.

A growth mindset is about valuing progress over achievement. It’s about finding pleasure in the struggle more than in the solution. And Mindset is full of examples on how to achieve that. It was a nice eye-opener. I’d realized that basically anything could be an opportunity: long meetings, conflicts with coworkers, activities I had previously considered boring. It was not about looking for new opportunities, but rather about allowing myself to capitalize on the ones around me.

Growing in the right direction

Some time ago I read an article about the value of a software developer on the market. The model was simple. Let’s say that the value consists of three elements: soft skills, hard skills and social connections. If we could rate them from 1 to 10 and then multiply them one by one, the maximum value is 1000. Rating first as 2, second as 8 and third as 2 gives us a poor result 32/1000. It is however way easier to get better from 2 to 6 than 8 to 9. Improvement? 96/1000. After gathering some thoughts from Mindset I decided to apply the same analogy to my overall skillset.

Working as a software developer requires me to do a lot of things:

Multiplying all of those activities sums up my overall productivity. Finding out the lowest-rated areas provides me with opportunities for quick wins. Even better: when other team members are not into those areas, then increasing those skills can have even bigger impact by filling the missing competency. It probably won’t make me a specialist in any field, but increases my overall usefulness in the workplace without strict structures.

The goal for me was always growth. After summing up my experiences and knowledge from books and articles, I started to be more aware of the way I learn. The basis of the process was to constantly question it. It got me to the point when Ie told myself that even when I’m going into the right direction, I’m still missing something. After months of reading Mindset I’d lost some of the spirit I had in the beginning. I was curious why. And the answer came with another book, found in in my Facebook feed (where I also found my last 3 jobs). The book was titled Ego is the enemy. Reading the title alone was not enough to change my situation, so I cracked it open.

Do you know the main difference between a book and an article? The former requires you to spend way more time than the latter. I’ve realized that in terms of getting the most out of the text, the time spent matters. Hours of reading created that valuable space for comparing stories from the book to my own past experiences. The book was about the ego.

I knew I had some, but what I didn’t know was how big it was. Huge.

Chapter after chapter my mood was going down. There was excitement, sure, but it was hidden beneath my realization of what an egotist I was. The reason I wasn’t progressing became obvious. I was not listening.

If I could picture my learning process as a funnel, every experience, article, book, relationship, and opportunity would first be limited by my ego and then cognitive skills. 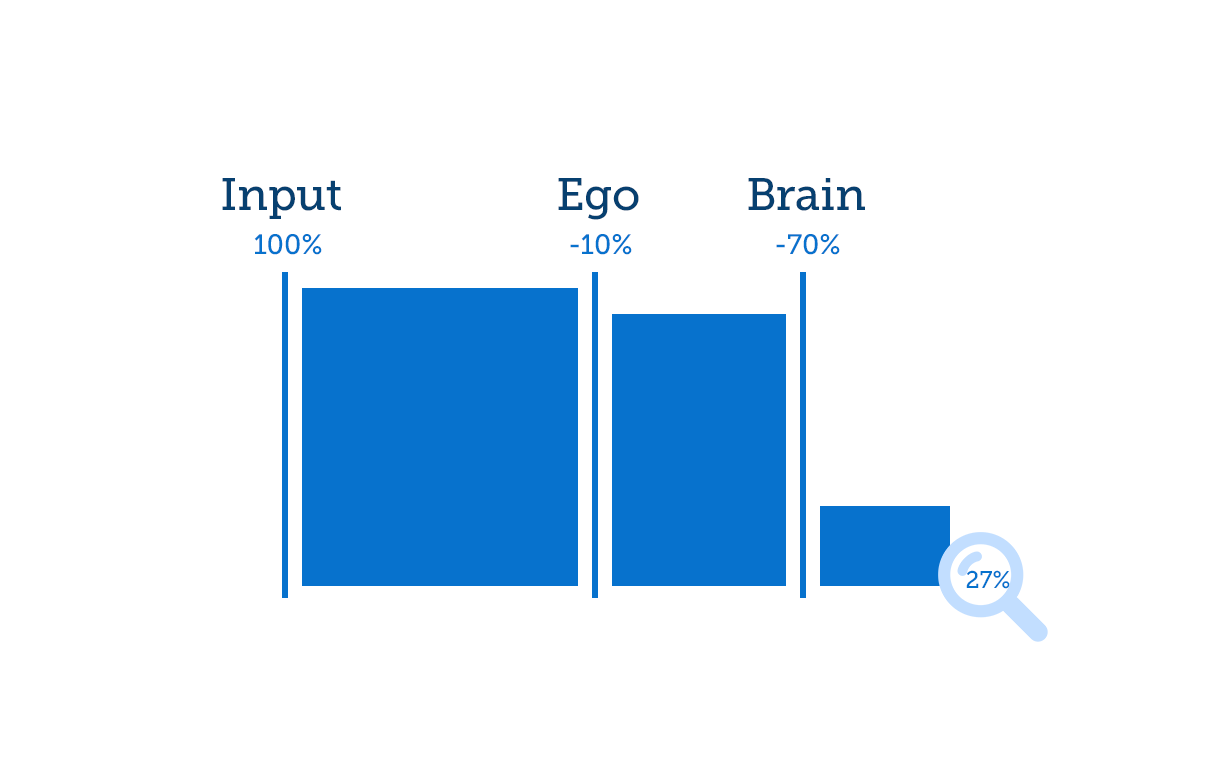 The challenge there was not to change one little thing that would make me more productive. It was about changing the behaviour. Some people may not be aware of their bad sight until they get a pair of glasses. I got mine. But is it even possible to just drop the ego? Short answer: nope. Longer answer: it depends.

Learning about the impact of my attitude on the world was only one thing, but it was crucial all the same. The next thing for me was paying more attention to what I said, did, and thought. I had to slow down a bit and ask myself a question: “Is this the best way to do/say something?”. This is a pretty terrible experience, because you are aware you’re person that you don’t want to be anymore: an egotist.

It takes some time to fix the thing inside you that has been growing for some time and it’s harder than cutting out a tumor. Carol Dweck in Mindset mentioned that, like an alcoholic, you can’t stop addiction, but there are ways to silence it. The same goes with the ego. I slip from time to time because the challenge is ongoing. It’s easy to go back and unleash your ego to become almighty again, but it’s not worth it.

Ryan Holiday’s book Ego is the enemy should’ve been the first one on my list. I’m sure that every item after would have even greater effect on me than before.

It’s fascinating for me how complex the topic of personal development is. Being thankful to ego that took you so far and then saying goodbye so you can continue your journey feels like dropping empty boosters during a multi-stage launch, so the shuttle can fly way further. But self-improvement is not rocket science. It can be practiced every day at a reasonably low cost.

I’m publishing my thoughts in hope that maybe they will find the way to a person being stuck somewhere in their career and inspire them to change something. I’m always happy to talk about the topic, so if you are interested, just contact me. I might learn something from you.